You are at:Home»Recipes»Owl’s Brew Tea Cocktails
By Rachel Safko on November 7, 2015 Recipes

Every great drink starts with a plant, said Drunken Botanist author Amy Stewart. Since the dawn of time, humans have been making spirits from herbs, leaves, seeds, fruit, flowers, bark and roots. Pick your poison and chances are it stems from the natural world, from bourbon to gin, or Campari and other bitters. Even common mixers like tonic water are made from cinchona bark, which dates back to the 16th century and is still used for medicinal purposes like treating malaria.

Experts often make the distinction between tea (which comes from the Camellia Sinensis plant) and herbals like lemon verbena or peppermint tea, which isn’t really tea at all but an infusion of the peppermint leaf. From an even broader perspective, pure teas such as Darjeeling or Sencha can also be seen as botanicals, similar to florals or spirits, each with its own unique qualities, opening up worlds of possibility for mixing tea with other liquids, and enjoying new flavor combinations.

I spoke with Jennie Ripps, author of the newly published Wise Cocktails and founder of Brew Lab Tea, which creates custom tea blends and cocktails for hotels and restaurants in New York. She is also founder of the Owl’s Brew, a hand-crafted tea mixer for cocktails with varieties like a classic English Breakfast with lemon and agave to Coco-Lada, a black tea with chai spices, pineapple and coconut that tends to pair well with rum and mezcal. Owl’s Brew has also been partnering with spirits makers like Scotland’s the Famous Grouse on drinks such as the Smoky Earl, based on a blend of Earl Grey and Lapsang Souchong that complements the peatiness of the scotch, adding a fresh layer of smoke. Here’s what Jennie had to say about her endeavors and the art of tea cocktails:

How did you first get into tea and the business of mixing tea cocktails?

The concept of infusion has always amazed me—that you could put leaves in water and actually end up with a delicious drink. I started out buying a lot of tea and experimenting with brewing, first with hot water, then cold brewing. The health benefits of tea also appealed to me. I recognized the disconnect between what some companies called tea, and what was actually in it. I’d hear people say, “I love this jasmine tea.” But if you looked at the tea, there wasn’t any actual jasmine in it. Or raspberry tea. Where was the raspberry? It became important to me to make sure I was using real ingredients. At the same time, I noticed that many restaurants with extraordinary menus, including excellent coffee programs, had very limited tea options, often just bags of Earl Grey and maybe a peppermint herbal. One of the first teas I blended was for the Hurricane Club in New York (now the Park Avenue Winter.) It was a looseleaf chai with coconut shreds; the flavors in it became the basis for Owl’s Brew’s Coco-Lada. I soon started mixing cocktails for parties and other events with Wise Cocktails co-author Maria Littlefield, and found that people were really intrigued by tea cocktails. They loved how tea enhanced the flavors in their drinks.

How do you think about tea as an ingredient in cocktails?

Tea is a natural botanical that can add different flavors and layers of depth to a cocktail. For Owl’s Brew, we source our teas from one of the largest tea importers in the U.S. and make the blends in Vermont, using small batches of fresh brewed tea. The nuances of particular teas tend to come through less in a cocktail—what you want is the boldest and best possible flavor profile. You’re looking, say, for the green floral essence of a first flush Darjeeling, or the robust smoky, earthiness you’d get from a strong Lapsang Souchong. You want the essence, not necessarily the subtleties. It helps sometimes to step back, as if doing a blindfolded taste test, asking yourself what the predominant flavor profile of the tea is, and how it might work with other flavors. I’ve had the benefit of learning from professional flavorists who’ve taught me some tricks of the trade. Chamomile, for example, enhances the flavor of pineapple and can actually create an even stronger pineapple flavor. When I work with restaurants and hotels, I’ll often get requests for seasonal drinks and am asked to develop recipes with earthy or woody notes for the colder months or florals for spring. Among them was a toasted oolong for New York’s French-Mediterranean bistro Claudette, with a greener, lightly oxidized Tie Guan Yin oolong, otherwise known as Iron Goddess of Mercy, a green Kukicha full of buttery, umami notes, and fresh sage.

How do you think about the benefits of infusing spirits with tea versus brewing it for a mixer?

There are so many different ways to incorporate tea in a drink, with benefits to each method. It really just depends on what flavors you want in the end. You could, for example, take the time to infuse a vodka with Keemun black tea and roses, but you won’t necessarily want to drink that straight up or on the rocks. It’d probably be a more natural base for a cocktail. I think of tea as a modifier that can add depth and flavor to a drink, in the same way that bitters might. It’s another ingredient to experiment with, just as you might use jasmine in a cocktail or jalapeno pepper. If you’re first experimenting with tea cocktails, you might test out different methods: infusing spirits, brewing your own tea or pouring in some Owl’s Brew to see what you like best. The recipes in the new book offer different options for making cocktails, using the Owl’s Brew in some cases and home-brewed tea in others. Ask yourself: how does this drink make me feel? I encourage experimentation and having fun.

One of Jennie’s favorite all-time cocktails is a smoky mezcal concoction from East Village bar Mayahuel, so I decided to give Wise Cocktail’s Black and Blue a shot at home to celebrate Day of the Dead. Contributed by Bubby’s mixologist Chris Mitchell, it’s a refreshing blend of tart, smoky and tropical, with muddled blackberry, mezcal and Coco-Lada (see the full recipe below.) Some other favorites are the Chocolate Arrow, made for a Valentine’s Day party at the Plaza Hotel. It’s a jazzy reinvention of tea at the Plaza by way of champagne, Kahlua and hojicha—a dark roasted green tea with earthy, chocolate-y notes and the added aphrodisiac of real vanilla bean. Jennie also creates smoothies and non-alcoholic tea sodas, like a calming, immunity-boosting rosemary and thyme winter tonic, and has done an all-natural take on Mountain Dew with green rooibos, chamomile and pineapple. Do read more about Wise Cocktails and the Owl’s Brew at www.theowlsbrew.com but not before trying out these spirited brews. 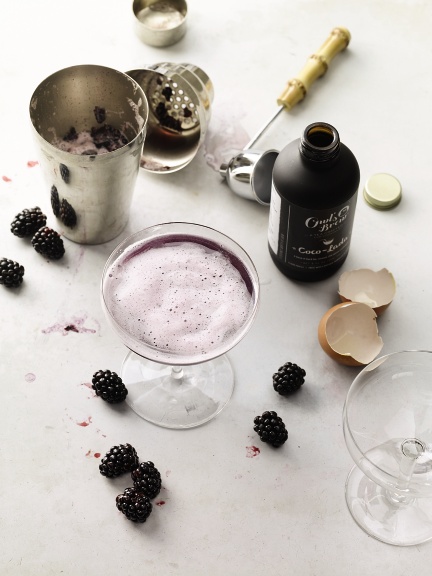 In a shaker, muddle the blackberries. Add the mezcal, Coco-Lada, and egg white. Shake with ice. Strain and pour into a glass. 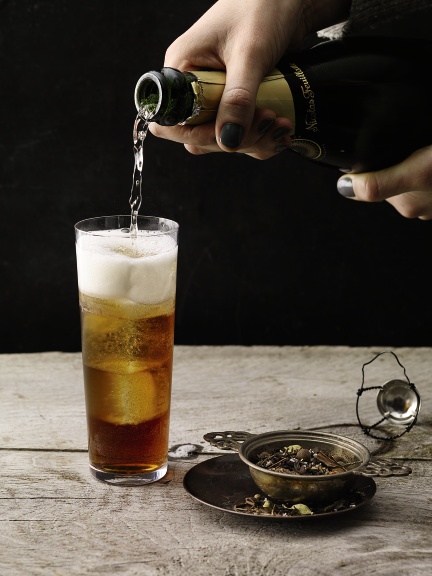 Mix together in equal parts and use 2 full teaspoons each:

Combine all the tea base ingredients in 6 oz. of room temperature water for 10 minutes, agitating from time to time. In a shaker, combine 3 oz. of the tea base, the Kahlua, and agave nectar. (You’ll have some tea base left over. Feel free to drink or discard.) Add ice to the shaker and gently swirl to chill. Pour into a glass. Add the Champagne and gently swirl again. 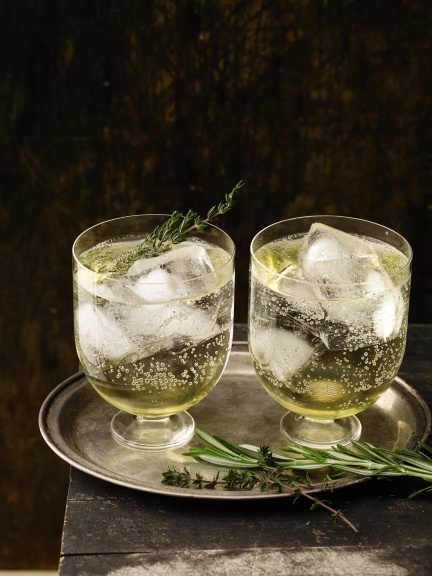 To make the simple syrup: Pour the water into pan and bring to a boil. Once the water boils, immediately stir in the sugar until the mixture is clear. You’ll use only 1 oz. per soda. You can use either a tea linen or place the green rooibos, rosemary, thyme and lemon balm directly in the pan with the simple syrup. Let sit for 1 hour, stirring from time to time. Remove the sachet or strain out the remaining ingredients. Let the mixture cool to room temperature. Pour 1 oz. of the tea base-infused syrup into a glass over ice. Add 6 oz. of sparkling water and then stir.

Jennie Ripps is the Founder and CEO of Owls’ Brew, a tea crafted for cocktails, and of sister company, Brew Lab Tea, which specializes in creating artisanal custom tea blends.In 2014, she was selected by the Specialty Food Association as “35 under 35”, among food and beverage entrepreneurs. Jennie is a graduate of Cohort Seven of Goldman Sachs’ 10,000 Small Businesses program, and is a blogger for the Huffington Post’s “Healthy Living” and “Taste” sections. She is the co-author of Wise Cocktails, published by Rodale this October.

Rachel Safko writes about global niche markets and old world luxuries. You can read more of her work at www.rachelsafko.com. She is a financial journalist, certified tea specialist and perfume lover, who’s always on the hunt for ways to engage the senses from her home in Greenpoint, Brooklyn.