Trending
You are at:Home»Travel»Tea Farm Hopping in Queensland
By Felicia Stewart on August 11, 2015 · Travel

It’s common knowledge that Australians are discriminating coffee drinkers. Walk into any café and it’s the aroma of coffee beans that captivates. From coast to red center, it is the (hot) beverage of choice.

But coffee hasn’t always been King. Tea was the number one beverage of Anglo-Celtic Australians from British settlement in 1788 to the nineteen fifties. The iconic image of Australian outback life is a swagman sitting around a fire with a “billy” on the boil for tea. Perhaps the most famous example is found in Banjo Paterson’s (1895) poem “Waltzing Matilda” that has become Australia’s most recognized bush ballad:

Once a jolly swagman camped by a billabong
Under the shade of a coolibah tree,
And he sang as he watched and waited till his billy boiled
“You’ll come a-Waltzing Matilda, with me.” 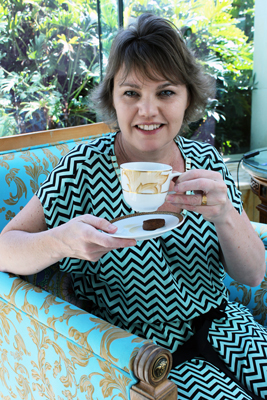 Many stories have been told over a cup of tea, except (perhaps) the story of tea in this nation. To discover the tales behind this much loved beverage we traveled to one warm, green destination: Far North Queensland.

Tea was first brought to Australia in the 18th century by the early settlers from England (mostly convicts). They would have brewed low-grade Chinese green tea known as “common green tea”, which was in fact, used as a currency to pay convicts. If times were hard or Chinese tea unobtainable, the leaves of the Australian tea tree and the sweet tea vine were used as tea substitutes.

Commercial growing of tea in India developed rapidly in the second half of the 19th century. In the eighteen eighties there was a dramatic switch in Australian buying habits from Chinese green tea to Indian black tea. British Indian suppliers also played on British loyalties, emphasizing “empire” tea over “foreign” Chinese tea.

As green tea was associated with Australia’s convict past, and early twentieth century Australia was keen to erase associations with its convict legacy, Indian black tea literally bounded into the country. It was also fortuitous that the Australian dairy industry expanded at this time, making fresh milk available, so black tea with milk and sugar became the national beverage.

Demand for tea had become so great that Australia had become one of the world’s premier tea-drinking nations in the late 19th century, prompting entrepreneurs to look seriously at the prospect of growing tea in Australia.

Cue: Far North Queensland and the Cutten brothers. In 1882, these four enterprising brothers rowed a boat down the Tully River and started growing tea and coffee near Bingil Bay, just over 100 km south of Cairns. However, their efforts were thwarted by a cyclone, tidal wave and the worst drought in a century.

It wasn’t until half a century later that Indian-born doctor, Allan Maruff (of Nerada Tea fame), went in search of the Cutten farm. He found tea plants over 15 meters in height deep in the rain forest, as well as numerous seedlings in the undergrowth. He collected hundreds of seeds and seedlings and started a tea nursery behind his surgery in Innisfail. And, thus, the Australian tea industry kicked into gear.

Today, visitors to the Far North can find a handful of tea estates in an area called the “Wet Tropics”, stretching from the eastern coastal forest fringe to the Atherton Tablelands in the west and far north to the Daintree Rainforest.

The tea experiences in Northern Queensland are well worth the effort. Go there before the rest of the world catches on and lose yourself in the peacefulness and timelessness of a heritage that’s gone by but not forgotten. 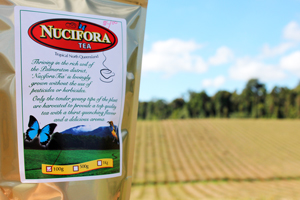 Rows of tea plants greet travelers on the road between Innisfail and Atherton Tablelands. The plantation covers 150 acres and the rich volcanic soils have produced quality black tea for more than 15 years. No pesticides or herbicides are used on the plantation and the leaves are not blended with those from other areas or crops. The tender tips of the plant are harvested every 21 days by machine. Nucifora runs tours or you can purchase tea direct from the farm via a roadside stall.

Located on the turnoff to the beautiful Millaa Millaa Falls, this tea house is the perfect place to rest and enjoy a Devonshire tea. 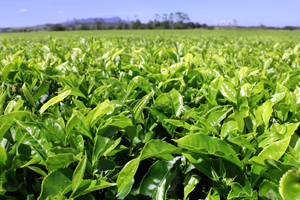 Nestled into the foothills of the Tablelands (790 m), you can’t miss the Nerada Tea Estate; strips of bright jade green contrast against the red volcanic soil and other local crops. One thousand acres of tea plants deliver more than six million kilos of fresh tea leaves to the Nerada Tea processing factory every year.

There are tours through the estate where visitors can engage in various tea-related activities like plucking from the tea bushes or watching the tea being harvested and processed. Or one can simply sample the tea in the Visitor Centre, while appreciating the lush carpet of green outside.

Malanda is a 1.5 hour drive 90km south west of Cairns. The Visitor Centre is open seven days a week.

Fancy milk with your tea? The Malanda Dairy Centre is an innovative retro milk bar style restaurant, showcasing the food and produce of the Tablelands region. It also includes a Taste of the Tablelands retail section and an interesting tour and interpretive center for the local dairy industry. 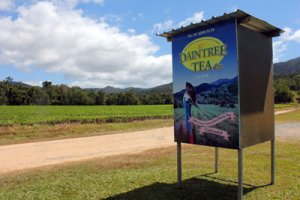 Run by the Nicholas family, the Cubbagudta Plantation is situated in the heart of the Daintree Wilderness and Rainforest area. Just pull over on the roadside and peruse the self service center, which contains photographs, information brochures, and old machinery displays. Tea is available for sale as loose-leaf or tea bags next door at the Lync-Haven Rainforest Retreat. A fresh pot of Daintree Tea costs just A$4. 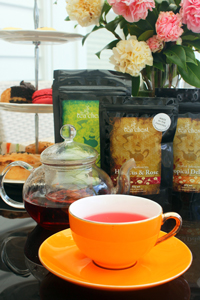 If variety is the spice of your life, then head to The Tea Chest in the center of Diwan town which in offers seven chai blends, including Chai Green and Chai Chilli. The company prepares the right tea in the Daintree using mostly local ingredients to reduce their carbon footprint. (Not too hard when you have a tea plantation right next door!)

Lastly, if you’re all done with the Far North but your tea quota is still unfulfilled, head towards the town of Mareeba, 60km west of Cairns. There you’ll find some quality tea – with exotic names like Misty Mountain and Hill of Clouds – among an extensive range of coffee and chocolate. And everything is available to sample! Pay the A$19 admission to Coffee World museum downstairs whose walls resonate with the ambience and aromas of years of tea and coffee-making history. 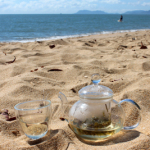 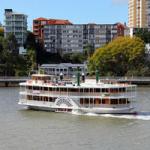 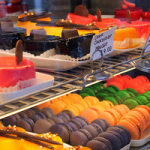 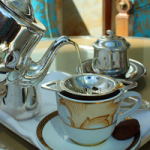 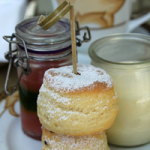 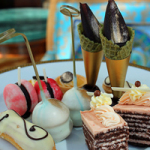 Note that this article was previously published on November 20th, 2014

In a past life, Felicia Stewart had a thriving career as a Public Relations Specialist but a fascination with history and travel won out in the end. In early 2014, she trained to become a Tea Sommelier and Educator through Australian Tea Masters; embracing her passion for adventure and desire to write about historical matters with the deliciousness of rare and artisan teas. Felicia is increasingly focused on how tea is not just a fine beverage, but also a tool for enriching our experience of life through mindfulness, slowing down, simplicity and connecting meaningfully with ourselves, nature and others.