Trending
You are at:Home»Travel»Tea Adventures in Bangkok Chinatown
By Gregory Goodmacher on October 13, 2014 · Travel

My photographer friend, John, loves documenting the lives of locals in out-of-the-way Bangkok locations. Having lived there for eight years and being as curious as a cat, he knows Bangkok as thoroughly as tuk-tuk drivers do. John suggested we meet at Hualumphong, the bustling Art Deco style building that is Bangkok’s principal train station. He promised to guide my wife and me through areas of Bangkok Chinatown that foreigners rarely encounter. Our goal—to explore, photograph, and savor unusual Thai and Chinese teas.

Arriving early, we strolled through the cavernous station watching people: Muslim women wearing black robes with just their eyes visible, novice monks in saffron robes playing games on smart phones, tourists sporting t-shirts with Thai brand names. A woman was selling milky iced Thai tea in one of the food courts. I purchased a cup for about 35 U.S. cents. Pairing it with bread I handed it to a homeless woman sitting outside the station. Pressing her hands together at face level and bowing slightly, she thanked me Thai style.

It was then that we spotted my friend as he was taking a photograph. He led us to Yaowarat Road, the main street of Chinatown. Later in the day we would have been met with quite a different experience: the evenings are cacophonous and lively. However, seeing that it was noontime during our visit, the atmosphere was quiet and sultry. 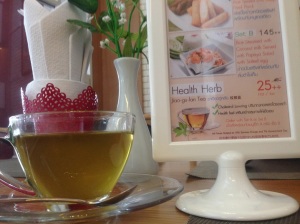 Sweaty and hungry, we entered an air-conditioned Chinese restaurant that coincidentally was promoting jiagulan tea. The amber herbal tea was the perfect antidote for the oily noodle dish we ordered.

Refreshed, John led us away from the touristic section of Chinatown, as he slipped into a narrow opening between buildings. Tiny homes and shops with small windows that rarely see sunlight lined the quiet, dimly lit alleyway. In the semi-darkness, we saw butchers slicing lumps of pork, men peeling mangoes, a cook stirring grated coconut over a fire, one man hauling blocks of ice, and other backstreet laborers. 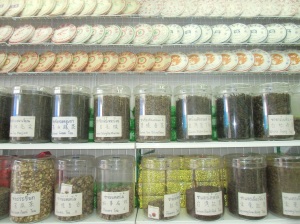 Exiting the alley, we spotted the Sen Xing Fa tea store. It was stocked with countless varieties of teas: green teas, black teas, herbal teas, flower teas, and unidentifiable teas from China, Japan, Sri Lanka, and other countries. Goods were stocked on the sidewalk, causing passersby to walk in the street.

Some teas were shockingly expensive. A tea labeled Best White Jasmine Ball AAA cost 8,000 baht per kilogram (2.2 pounds), about U.S. $246.00, but the shopkeeper lowered it to 7,000 baht after he saw me pointing the tea out to my wife. John bought about five hundred baht worth of tea. My luggage was full so I didn’t make a purchase. Back home, I regretted not buying any of the unusual compressed flowers that expand in hot water or any teas with mysterious names, like Rice and Pu’er tea, Black Red Jin Jun Mei, or Honeysuckle. 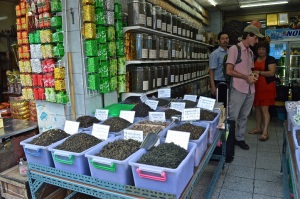 We continued exploring. Chinatown’s residents live in buildings squeezed together, and the streets and sidewalks become part of their homes and businesses. Three generations of one family met customers in front of their shop. The grandfather served water, cold sodas or teas from their refrigerator. The father was stirring a batch of black herbal tea along the sidewalk, while the son, wearing a Spiderman costume, was on the sidewalk playing with an action figure. We tried a cup of medicinal tea called nomgague, a word I cannot translate. It was sugary with a mixture of unidentifiable herbal tastes. One glass cost about 30 U.S. cents.

Quite suddenly a motorcyclist stopped in front of another store that provided herbal teas. He quickly downed a glass of the black tea and a glass of a golden colored tea before driving off. Curious, we went to investigate. 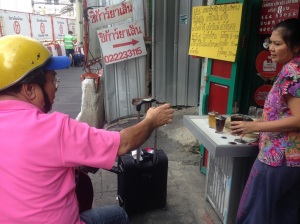 I bought a glass of the golden tea for 30 U.S. cents. A Chinese man told us that the golden tea was chrysanthemum, which prevents fevers and refreshes the body. Nomgague, the black concoction, he said, contains copious amounts of sugar and many herbs, which vary according to the tea maker. He added that nomgague promotes detoxification and reduces coughing. Considering Bangkok’s air pollution, it is understandable why motorcyclists would drink it.

Unfortunately, it was time for my old friend and I to say goodbye. I believe, though, we will meet again to enjoy more tea and create more memories.

Greg has savored various teas in over twenty countries on four continents. Exploring multicultural perspectives of tea and other lifestyle choices brings zest to his life. Greg teaches cultural and global issues at a college in Shibata, Japan. He carries a thermos of Japanese green tea to classes, to mountain peaks, and to hot springs. In addition to studying, enjoying, and writing about tea and travel in Japan, Greg also blogs about Japanese hot springs.