Trending
You are at:Home»Travel»Korea: The Land of the Morning Calm
By Linda Gaylard on March 2, 2017 · Travel 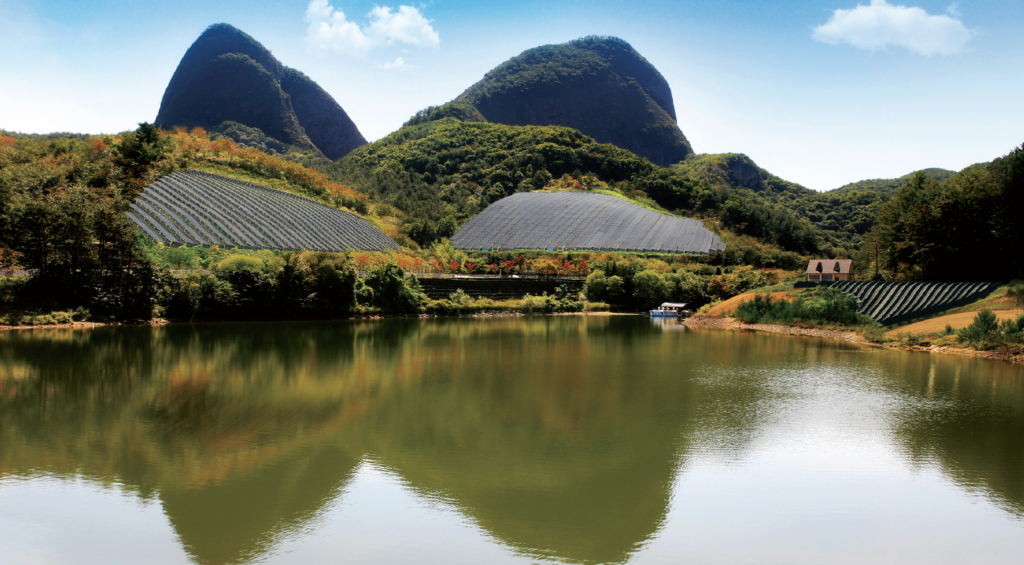 Many tea drinkers are astonished to learn that South Korea produces unique and delicious tea, grown in hilly southern regions with ideal terroir. Because of its limited circulation outside of Korea, most have never had a sip.

How is it possible that the premium tea products of this economic powerhouse remain unknown in the West? Small land mass, limited product and an enthusiastic market at home help to explain why very little Korean tea reaches the shores of North America or Europe. 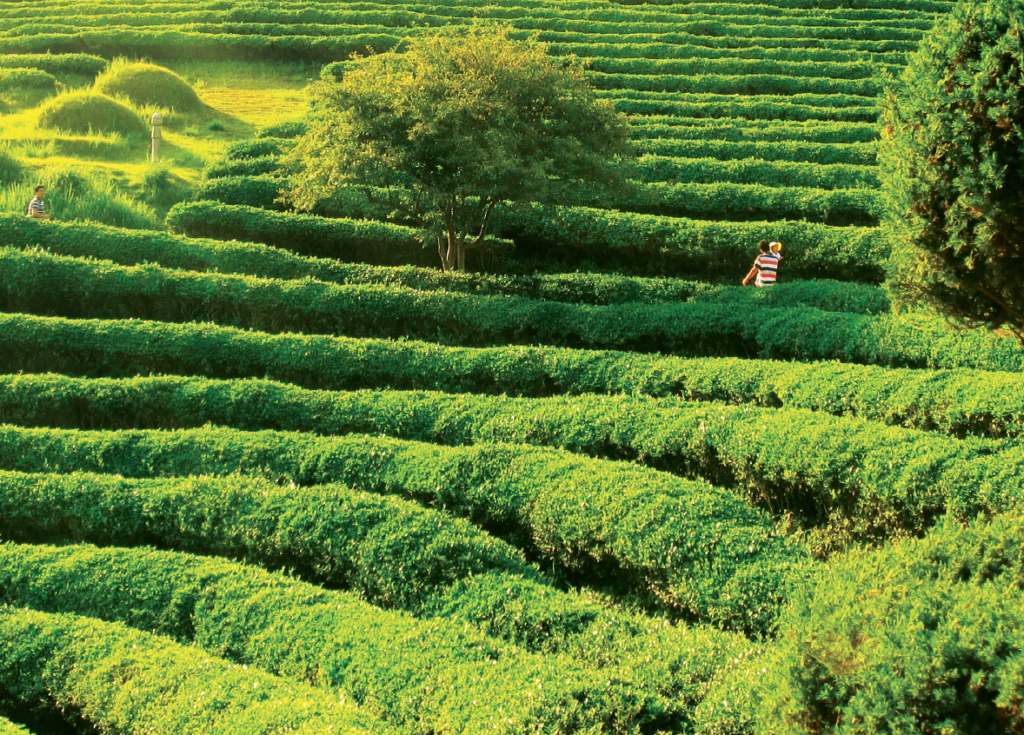 Korea is rediscovering tea thanks in part to the teachings of Hyo Dang, Ch’oi Pom-Sul, who published The Korean Way of Tea, the first book on tea circulated in modern Korea. His work popularized locally grown green teas which he called the Dew of Enlightened Wisdom. His work is carried on by Tea Master Chae Won-hwa at the Planyar-o Institute in Seoul which has educated a generation of tea experts and attracted the attention of young tea drinkers. 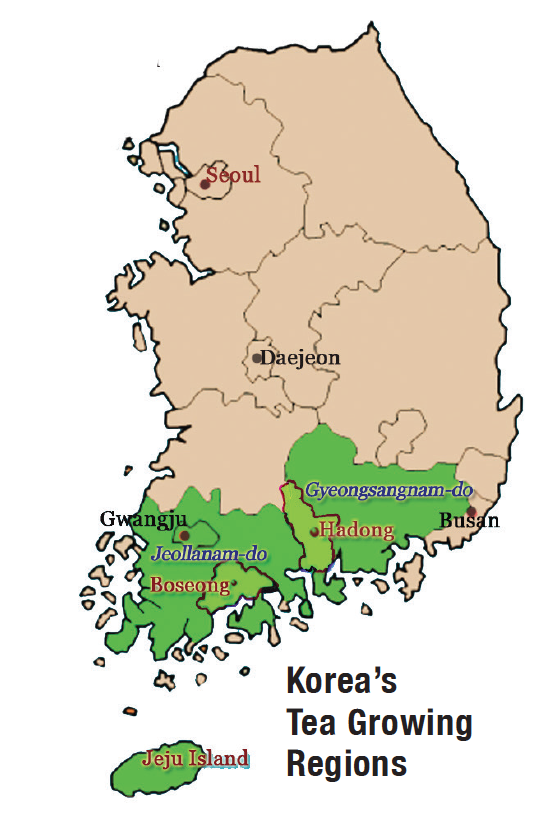 My journey took me to Korea’s southern provinces where the mountain air is clean and tea flourishes. Growers may cultivate just a few rows on the side of the mountain, but because of the nation’s new devotion to tea, they are able to make a living.

More than 2,500 acres (1,000 hectares) of tea plants are grown in the Hadong region, Gyeongsangnam-do, many of them wild on the slopes of Jirisan (Jiri Mountain).

The Hadong Tea Producer’s sign outside Kim Jong Yeol’s studio makes it easy for tea tourists to find his brand BuTea. As one of Hadong’s artisan producers, he exports in limited quantities to Canada, Sweden and the Czech Republic. In his small but efficient production area, teas are hand- made with precision and attention. Now relaxed and seated at his low pine log table, he prepared ‘nokcha Ujeon’, green tea picked before April 20th. The word ‘soft’ is often correctly used to describe the mouth-feel of early picked Korean green tea. Kim produces two oxidized ‘Balhyochas’- Saebyok (Dawn) and Noeul (Sunset). The taste is as poetic as it sounds—rich and sweet, with subtle hints of pine.

Further up Jirisan we were greeted by Cho Yun Seok of Jukro Tea, a man with an entrepreneurial spirit who runs the company with partner Joshua Kim. Jukro is one of Hadong’s biggest wild tea producers, making two metric tons of green tea and three metric tons of Balhyocha (GL) annually. Cho’s garden has been in his family since 1962 when his grandfather was one of the first Korean farmers to receive a government license to grow tea. He took us to see his wild tea plants, accessible by a network of winding wooden steps, up 600 meters, on the highest slopes of Jirisan. Cho declared, “Hadong may be the only region in Korea where tea plants are grown from seed. Clones get lazy, whereas growing from seed, the plant has more ‘power’ and its ‘circulation’ is better.” 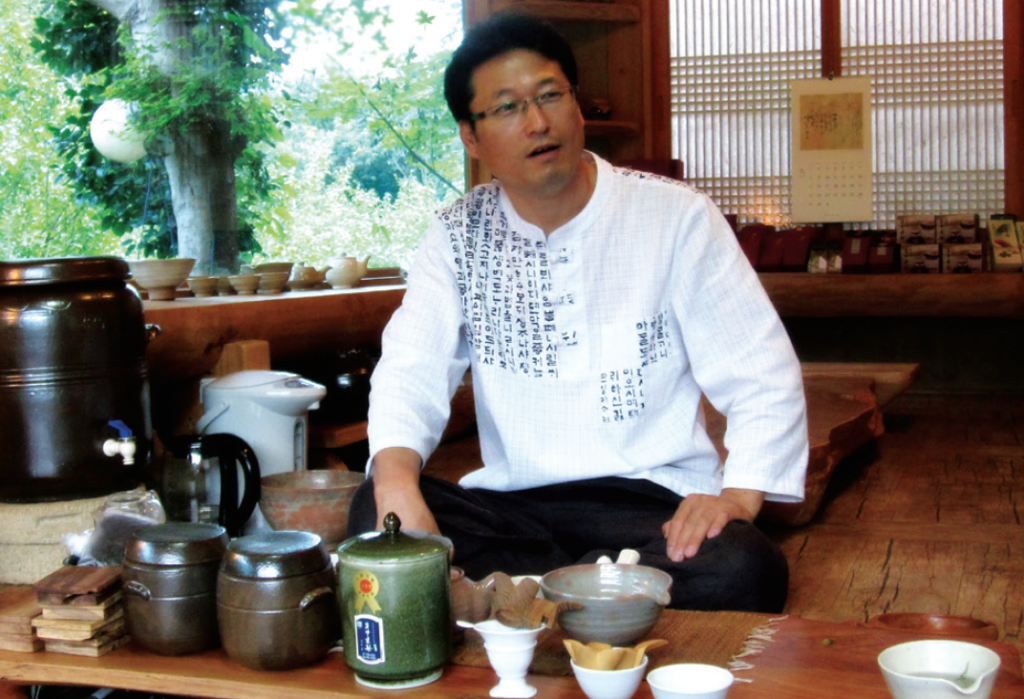 I had planned to sail to Jeju Island for a weekend, but the trip was cancelled due to typhoon warnings! A favorite destination on Jeju-do is the Tea Museum operated by OSULLOC, the island’s largest producer. The company operates three farms on Jeju and one in Jeollanam-do. In major centers throughout the country they operate 26 sleek tea shops that have helped to make tea a cool commodity with Korean youth.

In the southwest, Jeollanam-do is the largest tea-producing province in South Korea and is famous for the Daehan Dawon tea garden, near the town of Boseong. The Daehan Tea Plantation covers 1,400 acres. Daehan Dawon is somewhat of a tea mecca for Koreans, partly due to the huge following of the soap opera trilogy episode “Summer Scent” directed by Yoon Seok-Ho and fi lmed there in 2003 (with a remake scheduled in 2013). Although it’s a working tea farm, it has all the components of a tea theme park: picturesque rows of tea plants, tall pine allées, bubbling brooks, green tea ice cream and plenty of photo ops for everyone. We arrived in late afternoon when the light was perfect. The garden embodies what tea has become for the Korean public – a valued entertainment for the whole family.

Tea represents a respite from Koreans’ busy lives. This morning as I sip Kim Jong Yeol’s Saebyok (Dawn) 2012 I am reminded of the other name for Korea, “The Land of the Morning Calm.” On their road of tea rediscovery I hope they fi nd it in their generous hearts to show the rest of the world a path to their highly esteemed leaves.