Trending
You are at:Home»Travel»Manzanilla Caliente: Drinking Tea in Ecuador
By Kayla on August 19, 2015 · Travel 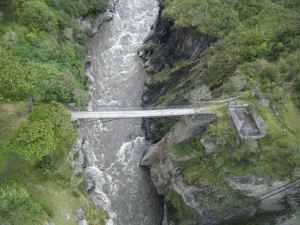 Translated in Spanish as “manzanilla” (pronounced man-zan-ee-ya), chamomile tea appeared on every menu I was handed last summer in Ecuador. Known for its calming properties, this herbal tea was just what I needed before and after my daily journeys. It soothed my nerves at breakfast time, when strange bugs were circling my head and the threat of a tarantula peeking out of a corner at any moment was hard to dismiss. It helped me wind down late in the day, when my feet were tired from walking and my brain was fatigued from many failed attempts to conjugate verbs.

What I love about drinking tea is that it often involves good company. This was certainly the case in Ecuador. My husband joined me on most tea-drinking occasions. He enjoyed sipping on “cerveza” (Spanish translation: beer) while I steeped my tea leaves and stirred in some sugar or, more preferably, honey.

On one particular evening, we had just finished walking around the city of Cuenca when we stumbled into an empty restaurant. A staff of well-dressed waiters and waitresses ran back and forth from the kitchen with upside-down wine glasses in hand. Eric and I took a seat, watched them re-stock their impressive wine glass collection and agreed to order something to drink. There it was on the drink menu: manzanilla. 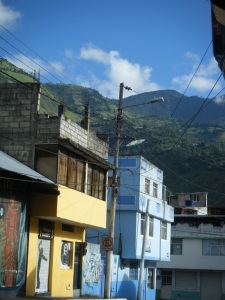 “I’ll take a cup of chamomile tea, please,” I said to the waitress, hoping that she spoke English.

She didn’t. Her giggle was the giveaway.

I wanted to tell her that it’s rare for me to drink cold tea—make a little conversation, you know—but after Eric ordered his beer, she pivoted and hurried toward the bar. 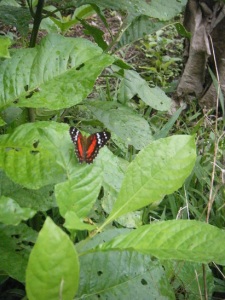 Though the restaurant remained empty, we enjoyed the quiet atmosphere and the view of the street’s soft glow at dusk. Plus, we got to listen to the waiters and waitresses engage in conversation. We couldn’t understand what they were saying, but it was intriguing all the same.

“I’m glad we stopped here”, my husband said, leaning in close so I could admire his blue irises. The look in his eyes made me wish we hadn’t purchased round-trip plane tickets. How difficult it would be to return home after stepping into the Amazon rainforest, biking through the Andes and rappelling down waterfalls.

The waitress quickly returned with our drinks. I felt thankful for not only the steaming herbal liquid in front of me, but also the mug in which it was served. This mug, dark red in color, was designed for an aesthete like Oscar Wilde. He would’ve appreciated it, I thought. And the handle! The handle! It was the handle that I admired most—the way it was so politely curved, the way the fingers on my right hand slipped through it and curled around it. I realized it wasn’t just the tea that was soothing—it was also the vessel in which the hot water was poured and the tea bag was placed to steep.

A number of customers eventually walked through the door, filling the tables surrounding ours. But somehow, it felt as if we were still all alone—just me, my husband, and my soon-to-be empty cup of tea. Before we paid our bill and walked back out onto the city streets, I took a long look at that well-designed mug and wished that, like the bag of manzanilla slouched at the bottom, I could stay in Ecuador and steep . . . let the country’s warmth allow me to release all my colors and my flavors, too.

note that this post was previously published on Oct 27 2014

Kayla Pongrac is an avid writer, reader, tea drinker, and record spinner. When she's not writing creatively, she's writing professionally—for two newspapers and a few magazines in her hometown of Johnstown, PA.