Trending
You are at:Home»Inspiration»Tribute to John Harney: A Man of Blending Family & Tea
By Pearl Dexter on June 18, 2014 · Inspiration

On Tuesday, June 17, 2014, my heart was saddened when my friend Faith called to tell me the news of the passing of John Harney, founder of Harney and Sons Master Tea Blenders. 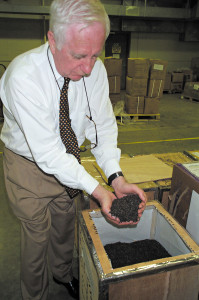 With heartfelt sympathy to all of his family and tea colleagues here in the U.S. and around the globe, my husband Jim and I raise our cup to the man who brought cheer to us all. We first met in the early ‘90s at his home in Salisbury, Connecticut when he was running his business out of his little garage. My eyes were wet as I attempted to write a tribute to my friend and colleague, John, and his life in tea. I wrote, I wept, I wrote, I crossed out words. I tried to be succinct. I wanted to make sure that I was conveying the profound effect that he had on my career and many others. I wanted to make sure that I included his family who has been woven into the fabric of his and their success with the family owned business.

John had an amazing gift of entrepreneurship and charm, but more than that, friendship. We followed his company’s growth for over 20 years.  I realized as I kept writing that there was nothing more succinct than what we published in TEA A MAGAZINE back in 2011.

So, at The Daily Tea we have chosen to republish the tribute to John in his honor. As only he called me, I sign off with much affection as “Pearl the Girl!”
–Pearl Dexter, Founder, Tea A Magazine (now The Daily Tea)

Originally published in Tea A Magazine in 2011
“John Harney is a man I admire and respect. His acumen for public relations and the tea business is remarkable. He began his career in specialty tea over forty years ago in the northwestern Connecticut town of Salisbury, where lived out his life. He gives credit to Stanley Mason, an English gentleman who founded the original Sarum Tea Company. John invested not only his money, but his time.

For ten years he apprenticed under Mr. Mason’s tutelage: tea tasting, tea blending, and building relationships with customers and suppliers. Three years after Stanley Mason died, John Harney established his own business, Harney & Sons Fine Teas, in 1983. His son Michael joined the company within a decade. Both John and Michael were graduates of the Cornell School of Hotel Administration. When his son Paul left the United States Marine Corps, he too, joined the family business.

They soon realized the need to educate not only the consumer, but the food and beverage managers, hotel staff, and retailers about the fine art of brewing good tea. They also reached out to food editors from national publications, inviting them to a summit all about tea. There were presentations on the health benefits of tea, cooking with tea, the fascinating history of tea, and tea tastings galore. One of those editors at the summit said, “What Steinway is to pianos, Harney & Sons is to tea.”

It was at one of those summits that I first met the Harneys friend James Norwood Pratt and a tea broker from Germany, Marcus Wulf. They were the pioneers in educating the rest of us, and later invited us to join their illustrious team, educating Americans about tea. I once said, “In learning about tea, our cups need refilling all the time.”

John Harney believed that sales take place one cup at a time. He has been at the forefront of attaining the respect and prominence the specialty tea market enjoys today. His own family business has grown more than ten-fold since we met two decades ago.

What can one say about a man of letters? You let the letters speak for themselves—
Tea ExtrAordinaire!” 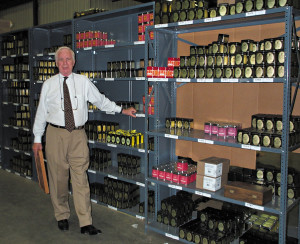 In 1994, pearl Dexter created Tea A Magazine, educating the public about tea culture. In 2012, Pearl passed the baton to The Daily Tea.