You are at:Home»Inspiration»Tea from Up Top
By Dan Bolton on August 5, 2015 Inspiration

A century ago an aerial ropeway stretching 5 kilometers was the only way to retrieve chests of tea from the upper reaches of the Kanan Devan Hills Plantations. Now these exotic teas are as near as the store. 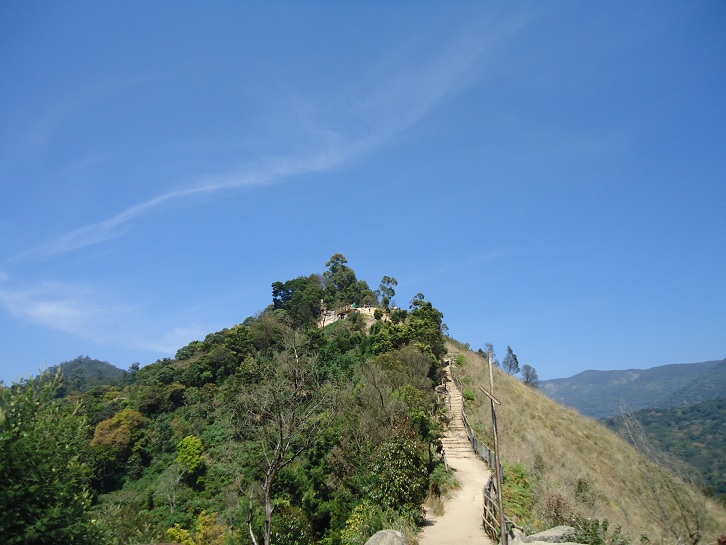 Tea chests were lowered 5 kilometers downhill from Top Station south to Kottaquadi in Tamil Nadu. The tea was then shipped 15 km by cart to Bodinayakkanur, at 1,158 ft. a vertical drop of more than 5,000 feet. It was then transported by rail to destinations within India including the port at Cochin where it was shipped to England. Remains of the aerial ropeway station are still visible. The highpoint of the ropeway at Bodi was 6,270 ft. (1,911 meters).

Today Kundaly Organic Tea Estate sits in the shadow of the seven peaks of the rugged Western Ghats Mountains—an UNESCO World Heritage Site—known as the High Range. Located deep in South India, this subtropical terrain of the Indian state of Kerala rises from the Arabian Sea to 8,842 feet. The rolling foothills are grasslands interspersed with forest groves known as shola. The surroundings could be mistaken for alpine meadows were it not for the elephants. 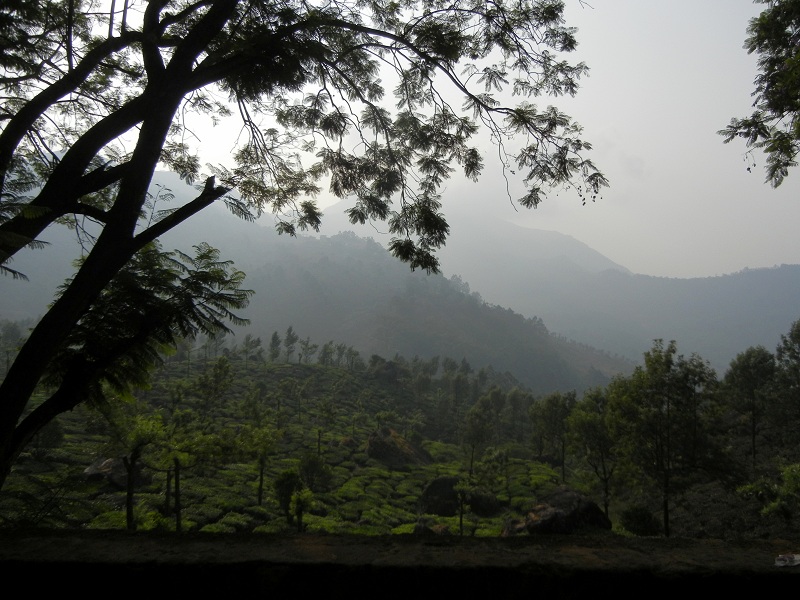 The High Range is home to the Nilgiri Tahr, an endangered mountain goat, and Gaur (Indian Bison) as well as the Golden Jackal and the Jungle Cat which can grow to 35 pounds. Highs are 77˚F year round with heavy rainfall during the summer monsoon. The tea lands are bordered by the Kundaly River and the 40 sq. mile Eravikulam National Park. Kundaly is one of 82 divisions on 17 estates that make up the Kanan Devan Hills Plantations (KDHP). 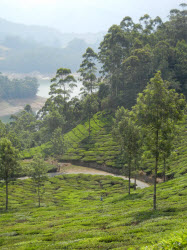 KDHP’s miles and miles of terraced tea bushes date to 1880 when settlers first planted spice and tea near the city of Munnar. The plantation was operated by James Finlay until 1963, when Finlay entered into a joint agreement with Tata Tea Co. KDHP is known for its bright and aromatic black tea. It produces popular organic green teas as well.

Tata Global Beverage divested operations in 2005 making KDHP one of the few employee-owned plantations in the world. Workers now own 58% of the venture which annually produces 22 million kilos of tea, earning nearly $47 million from sales worldwide. KDHP employs 11,300 and hires another 1,400 part-time workers during harvest. With 17 tea factories on 60,000 acres it is the largest tea plantation in South India. 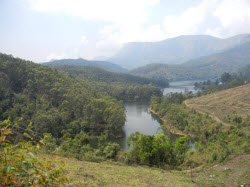 Since the name of the nearby city, Munnar, means “three rivers”, it’s not surprising to discover three fast-flowing rivers converging there: the Muthirappuzha, the Nallathanni and the Kundaly. Fed by these mountain rivers, the area remains a lush, multi-hued green oasis of bio-diversity and historical heritage, perfect for growing tea and spices. It’s history and masala chai in the making.

The nearest train station is 120 kilometers away because no train can traverse the gorges and make the grade. More accessible now than it was a century ago, the city of 1.9 million residents draws determined visitors. 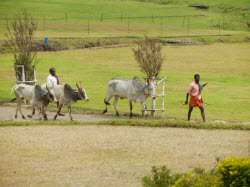 Tourists catch a plane to Cochin International Airport in Nedumbaserry, 30 kilometers from Kochi, where they continue the journey by car or bus. The fascinating drive leads past quaint local shops and chapels, lavish green landscapes and tempting aromas. Visitors are entranced as the long hours fly by. With the final approach to Munnar, perfectly manicured spice and terraced tea gardens captivate the eye, signifying, “you have arrived”.

Thirty-two kilometers upstream from Munnar, and higher still, is the 300 acre estate which borders the crystal clear Kundaly River. For decades ropes and pulleys stretching five kilometers were the only means of supply. Kundaly was called the Top Station in the 1901 terminus of the Kottagudi Aerial Ropeway, one of the longest aerial ropeways in the world. It retains the name to this day. Most visitors stop at the Rajamalai Wildlife Sanctuary17 kilometers from Munnar then take a short ride to Mattupetty Lake. From there, it’s a scenic walk on a well-traveled trail to the spectacular panoramic view. It’s worth the trip. 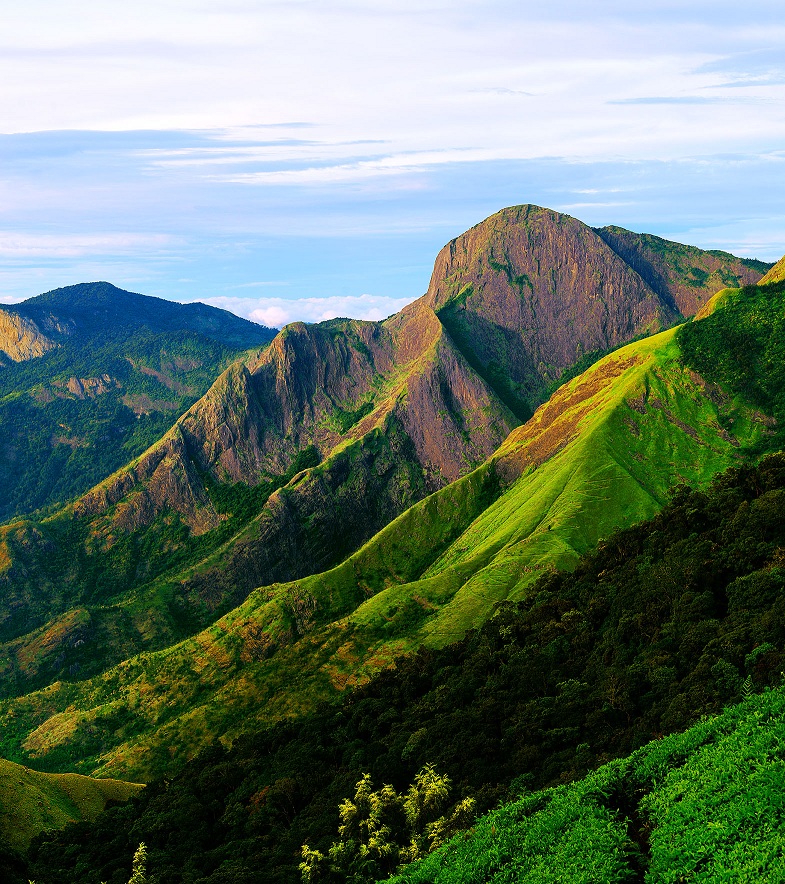 Top Station Cliffs at Munnar Photo by by Issacsam

Kundaly tea is processed at the Chundavurrai factory which is situated at 5,760 ft. above sea level and was constructed in 1985. The tea produced there is Fair Trade Certified and Rainforest Certified. KDHP is a member of The Ethical Tea Partnership and both the factory and fields are certified to the USDA’s National Organic Program standard by IMO Switzerland. 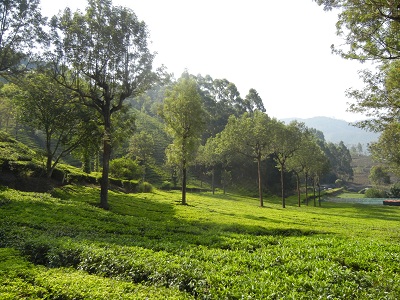 Kundaly green and black teas are aromatic, assertive, and lightly astringent with notes of walnut. The tea is filling in the mouth with a long finish. The green tea is bright and floral. Kundaly brand loose leaf teas are available in fine grades of broken pekoe in tins and packets. 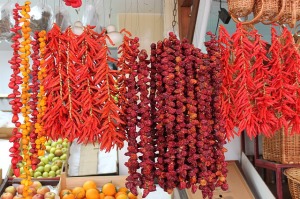 Two millennia of tales and 15,000 kilometers of trails mark the ancient spice routes.

Kerala is the heart of India’s spice growing region. Early this year the United Nations Educational, Scientific and Cultural Organization (UNESCO) initiated a project to document the historical significance and encourage tourism along the ancient spice routes. The path snakes through 31 countries stretching from Europe and North Africa and the Middle East to India, Sri Lanka and Southeast Asia. UNESCO hopes to revive the cultural, historical and archaeological exchanges among these nations.

As early as 2000 BC, spices such as cinnamon from Sri Lanka and cassia from China found their way along the Spice Routes to the Middle East. Profits from these spices were considerable and they were easy to transport as they were small, light and dried. Spices had ritual and medical values and could only grow in the tropical East, from South of China to Indonesia as well as southern India and Sri Lanka. The wealth of the spice trade brought great power and influence. 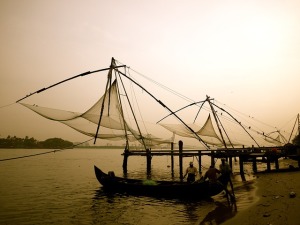 Kochi in central Kerala is believed to be near the ancient spice port Muziris, a destination where merchants from West Asia and the Mediterranean arrived by sea and land. The port flourished for 500 years at the height of the Roman Empire and then mysteriously disappeared.

Tourists wishing to retrace the trade routes will find accommodations at coffee and tea plantations in the region. Estates make available the 18th century plantation bungalows of teak and rosewood furnishings situated in scenic locations. Kanan Devan Hills Plantations near Munnar, has nine plantation bungalows for hire. The Nelliyampathy Tea Estate has two bungalows popular with tourists. Woodbriar Tea Estate in adjoining Tamil Nadu reports a 50% increase in occupancy during 2014 at its seven bungalows. Aswathi, a coffee plantation in Wayanad in Northeast Kerala offers a seven-room homestay and two elaborately appointed tree houses. The Kerala Tourism website has 3,000 video clips and 1,500 photos with text in 18 languages depicting the scenic mountain and jungle terrain. To learn more, visit: www.keralatourism.org 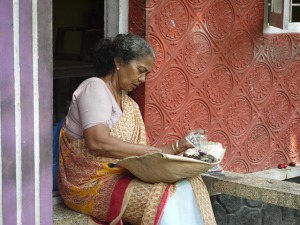 Think “spice”, and savory seasonings come to mind but the word is derived from the Latin “species” which means an item of special value. Transported 7,995 miles by sea and perilous land routes, it took years for a shipment of cloves or nutmeg to arrive in London or Paris from Maluku, Indonesia – once known as the Spice Islands.

note that this article was previously published on Oct 23rd 2014

Two pitchers of iced tea accompanied lunch and dinner in every season for his family of nine, but it was late in life that curiosity led Dan Bolton to discover the origin of tea. Now he travels the tea lands to learn first-hand how tea makes its way to the table.